The only difference between the two recipes is that Smitten Kitchen reduced the amount of sugar and vanilla, which totally works for me. Other than that, everything else is the same.

DIRECTIONS
1. Heat a cast iron skillet or griddle over medium-low heat; you want to get slowly get it nice and hot. I used a stovetop griddle on medium heat and it worked for me.
2. Stir the flour, sugar, baking soda, and salt together in the bottom of a medium bowl. Dump the sour cream in on top and stir it together very gently; it's okay to leave the texture a bit uneven.
3. Whisk the eggs and vanilla in a separate bowl and stir them into the sour cream mixture, once again, being careful not to overmix.
4. Melt about a tablespoon of butter in your skillet or griddle and pour the batter in, a scant 1/4 cup at a time. Cook for about 2 minutes on the first side, or until bubbles appear all over the surface, flipping them carefully and cooking for about a minute on the other side. Repeat with remaining batter.
5. Serve in a stack, topped with a pat of butter and a cascade of maple syrup. I also added banana slices and a sprinkle of cinnamon on top! Fresh berries would have been a great addition, too.. if only I had some. 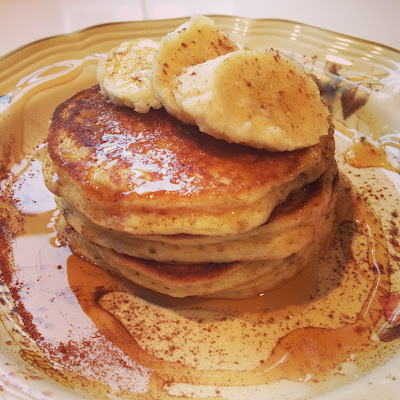 I was a little hesitant to actually make these after reading 1 cup of sour cream. That's just terrifying. It took some self-encouragement but, ultimately, I decided that using the sour cream I had was necessary. I took the plunge, and I'm totally happy I did.

These pancakes exceeded my expectations. I should know better than to question Smitten Kitchen and Pioneer Woman. They would never do me wrong. I've made a lot of pancakes and these are the easiest and lightest pancakes I've ever made/eaten. I didn't even have to beat egg whites separately and fold them in. Because there's so little flour and sugar in the batter, the eggs and sour cream make these super light. The key is to not overmix-- if your batter looks airy, your end product will be light and fluffy.

I guess I could have just gone to IHOP today to get a free shortstack, but these left me so satisfied that I don't even care. This will be my new go-to pancake recipe. It's flawless and I can't wait to indulge again with some other topping variations.
Posted by Bri at 1:54 PM