Want to hear something crazy? I haven't baked anything since I've been back from New York.. until now.

Two nights ago, after getting home late from work, I decided to skip sleep and test-bake instead. Of course, I then proceeded to eat the warm pear crisp.. right out of the oven.. at midnight. The next morning, I opened the refrigerator and devoured a couple spoonfuls and it was just as delicious. Seriously, all of that happened.

Welcome to the blog, Pear Crisp. I also recommed throwing a pillow of french vanilla ice cream on top while it's still warm to make it extra amazing. My local taste-testers approve of this recipe. So, if you hate it, blame them. But I feel pretty confident that you will enjoy this. 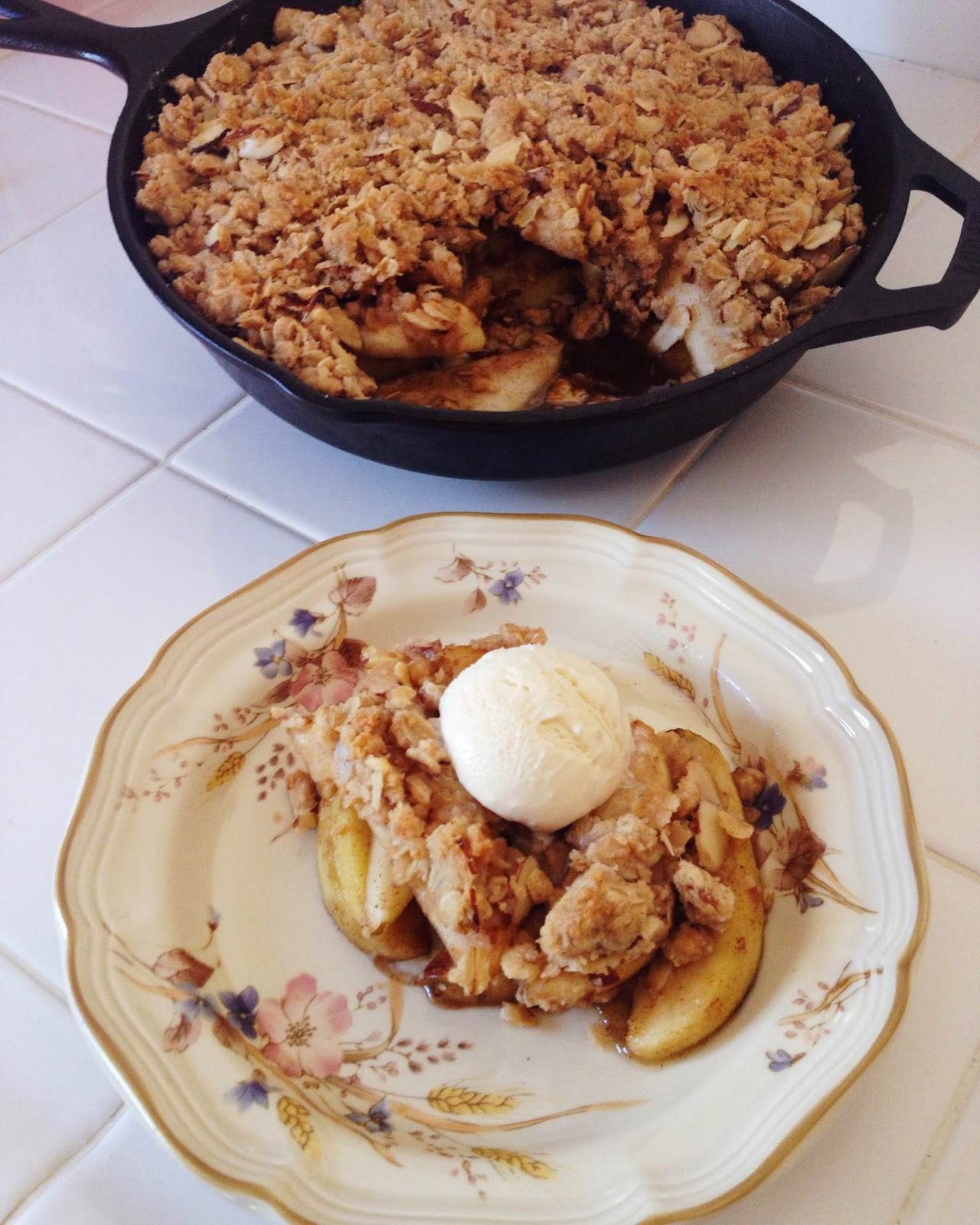 DIRECTIONS
1. Preheat oven to 350 degrees F.
2. In a medium mixing bowl, add all the filling ingredients. With a large spoon, toss everything together well. Set aside.
3. In another medium mixing bowl, stir together all topping ingredients together except for the melted unsalted butter.
4. Then add the melted unsalted butter to dry topping mixture. Gently combine well. Break up into crumble pieces-- keep large or break up as small as you like.
5. In a round 10-inch cast-iron skillet (or about the same size baking dish), distribute pear filling mixture into an even layer. 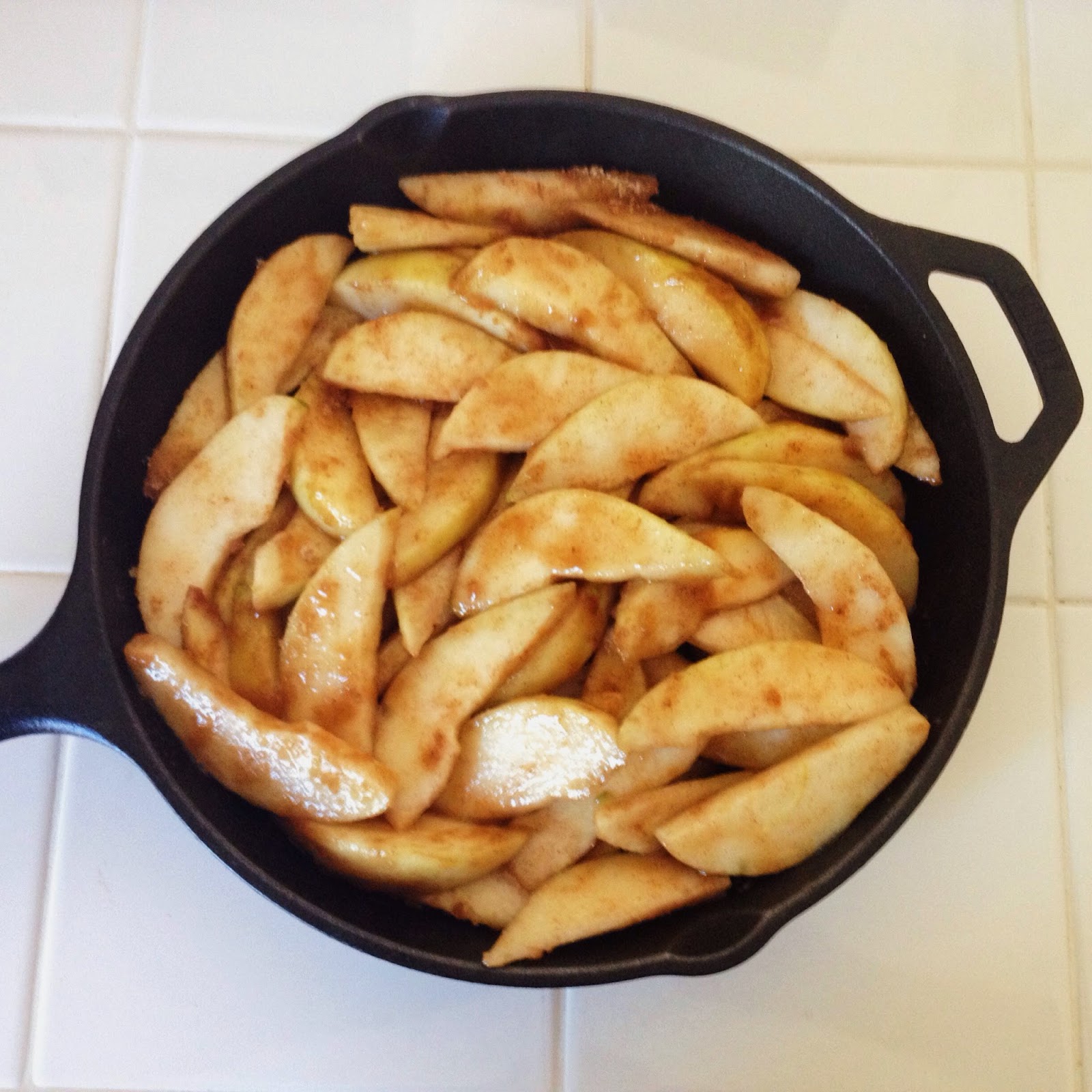 6. Then add crumb mixture and spread it out on top of the filling. 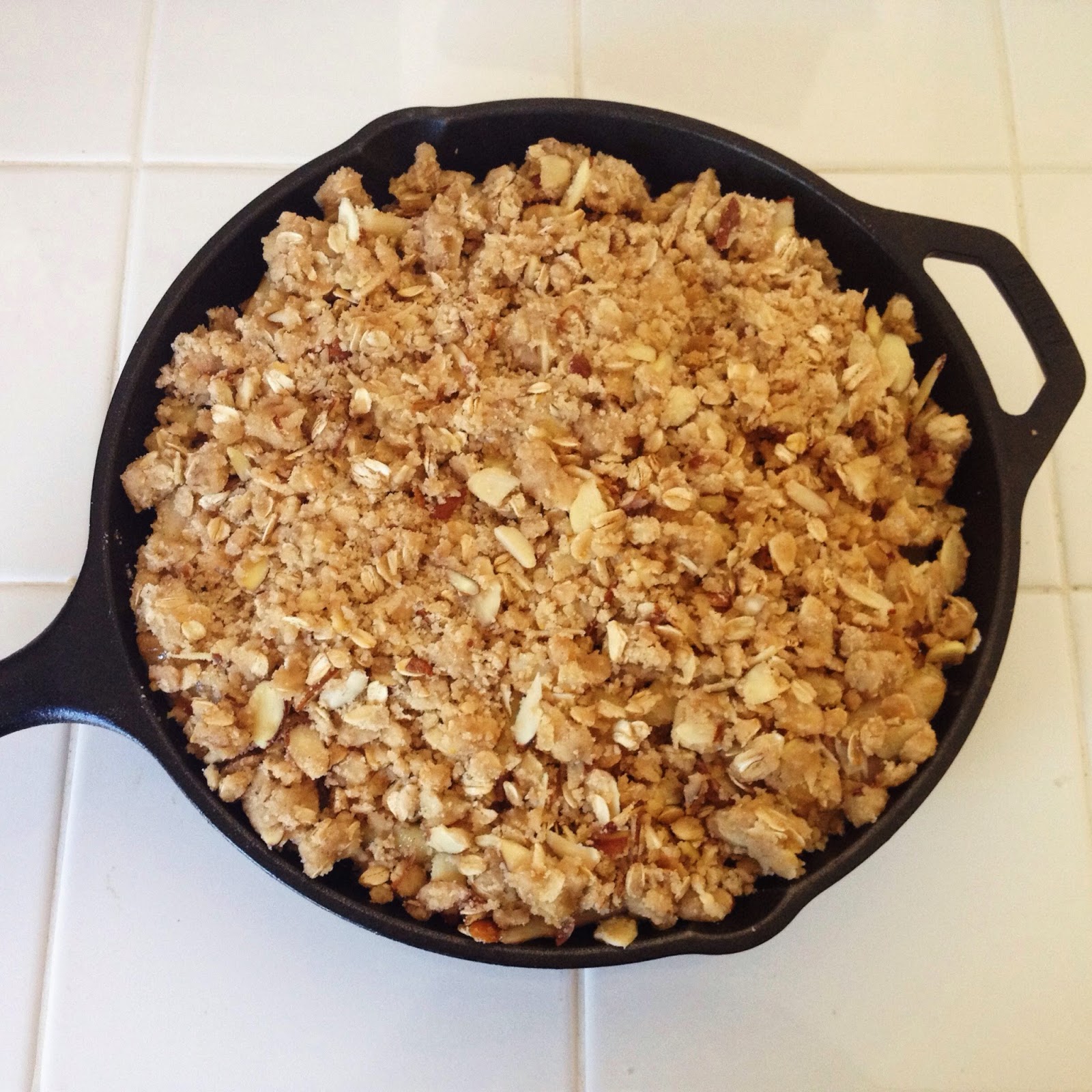 7. Bake on the middle rack of the oven for 20 minutes. Then transfer to the top rack for an additional 10 minutes.
8. Serve warm.. preferably a la mode. 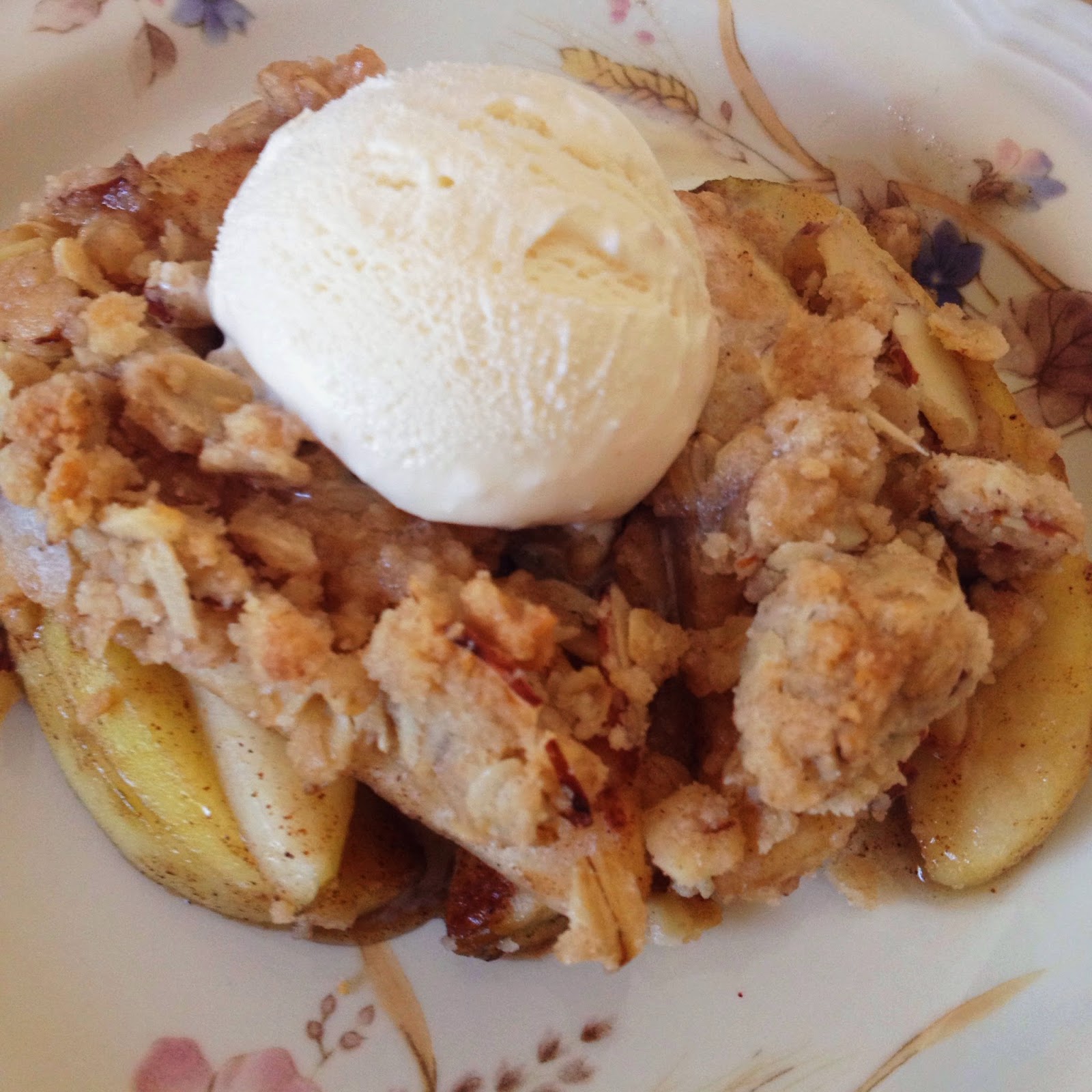 I used pears that were just under-ripened, because they mimic the firmness of apples and hold up better during the baking process. Slicing the pears fairly thick also results in a nice bite. I'm not a fan of a mushy fruit consistency. If you are, just slice your fruit thinner.

This may have been my first attempt at making a crisp, but it's definitely a new favorite. I used pears because I happened to have a 10-pound bag haunting my kitchen. However, you can substitute with apples, peaches, berries, or any other fruit of your liking.

I'm in love. Pear crisp is like apple pie's cousin, except a million times easier to make.
Posted by Bri at 6:59 PM No comments:

I just got back from New York last night and I could not be sadder about that. Every summer, I travel to New York to visit with my sister and college friends. But, this was an especially unforgettable trip. Like, seriously, it may have been the best one yet.

For me, the hardest part about going on trips is deciding which baubles to bring. If you don't already know, I have an extensive collection of jewelry. [And that may be the biggest understatement of the year.] One might assume that, having such a large collection, it's easy to pick out a few sparkly pieces for a nine-day trip. Wrong. I like having options. Choosing which bauble to wear is like choosing how I want to express myself for the rest of the day. I also try not to wear the same piece more than once in the same week, because all my baubles need a little love. With that said, I'm SO obsessed with the Crystal Mason Ring from the Baublebar x Stripes & Sequins collection. I wore this ring every single day of my trip. I'm also wearing it at this very moment. This ring is on repeat and the world deserves to know.

Grace Atwood of Stripes & Sequins is one of my favorite bloggers to follow, head of social for BaubleBar, and all-around amazing. I love every piece from her collection and I'm pretty positive that I'll eventually end up buying everything.

When Grace's collection first launched, I immediately purchased the Crystal Mason Ring and Crystal Pheasant Bib. I buy with my eyes and my eyes are naturally drawn to sparkle. When I received them in the mail a couple weeks ago, this happened... 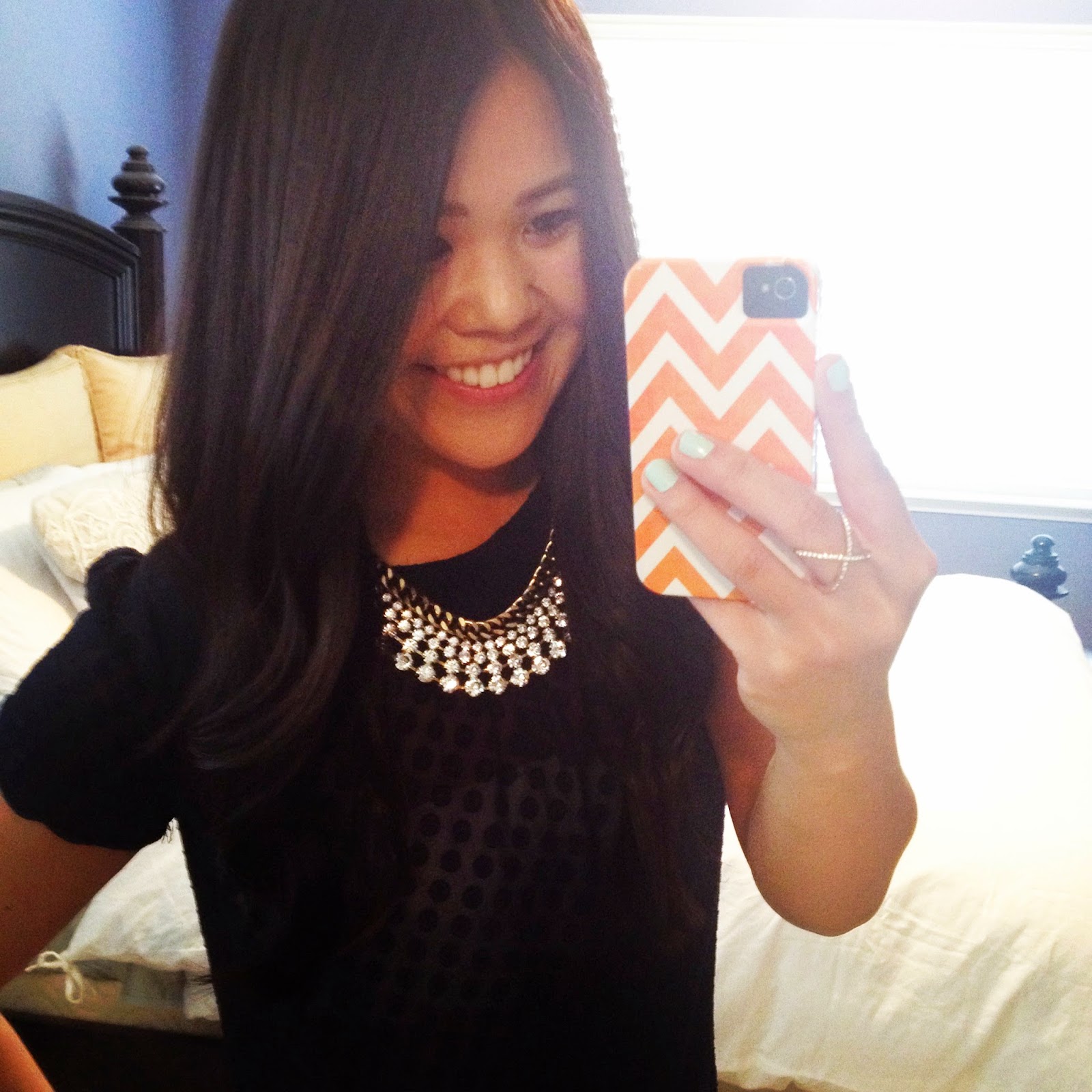 And, during my New York trip, the Crystal Mason Ring just seemed to add the right amount of sparkle to some memorable, Insta-worthy moments. This ring has gotten a lot of action and clearly goes with me everywhere. I wore it...

..while watching the World Cup with friends. 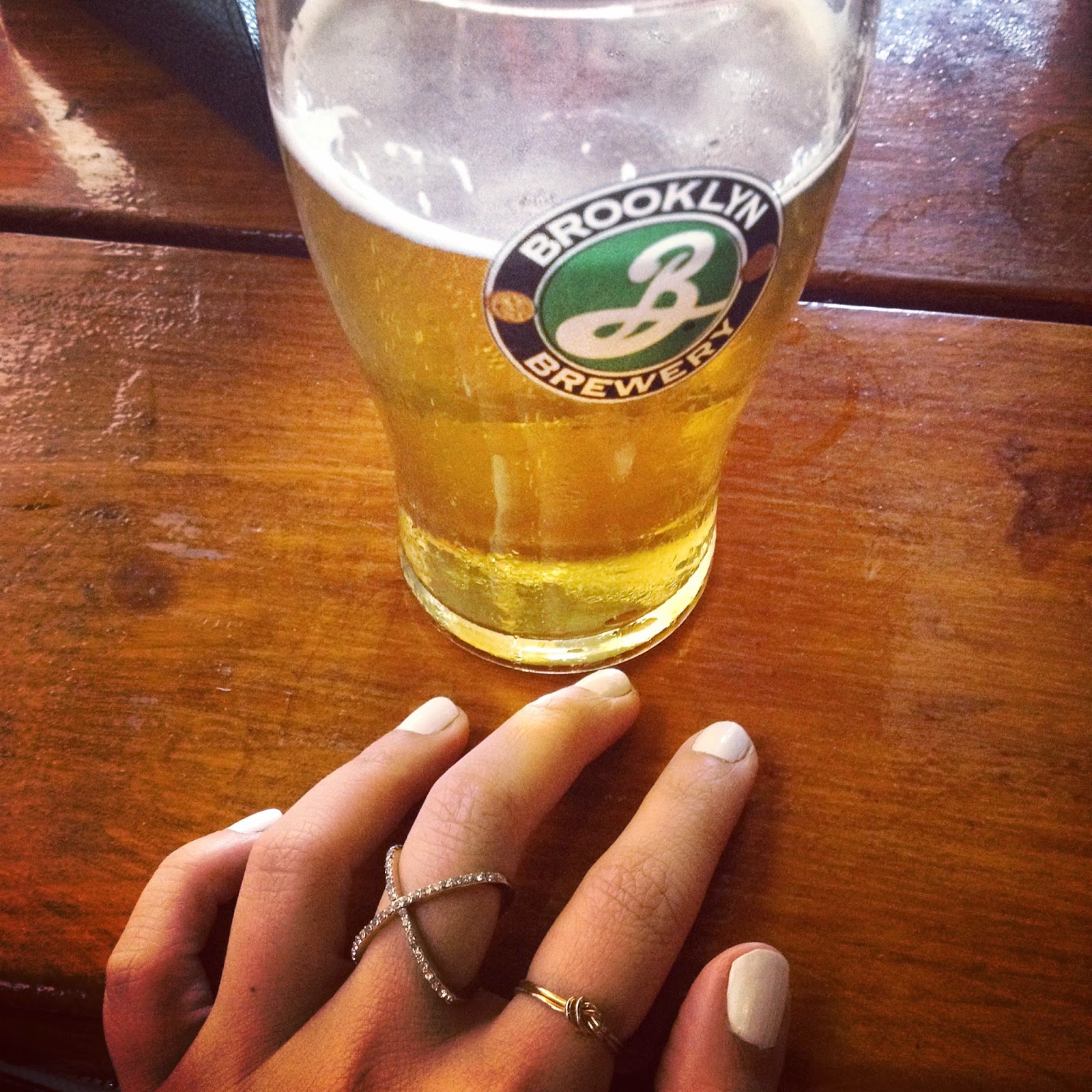 ..while eating a giant ice cream sandwich with my sister at Smorgasburg. 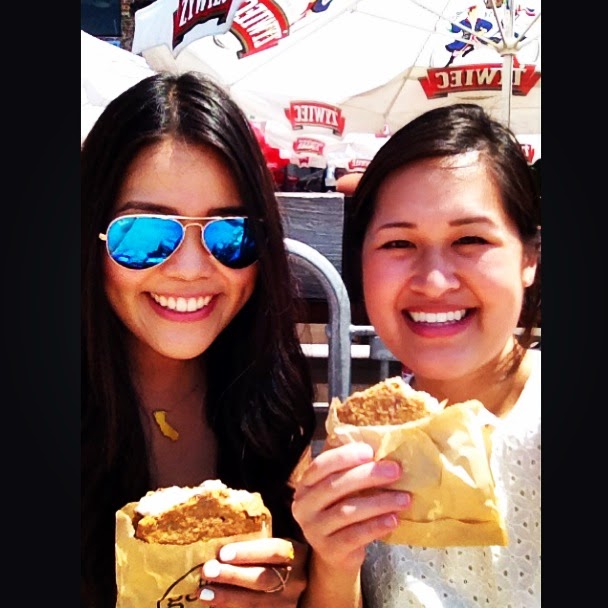 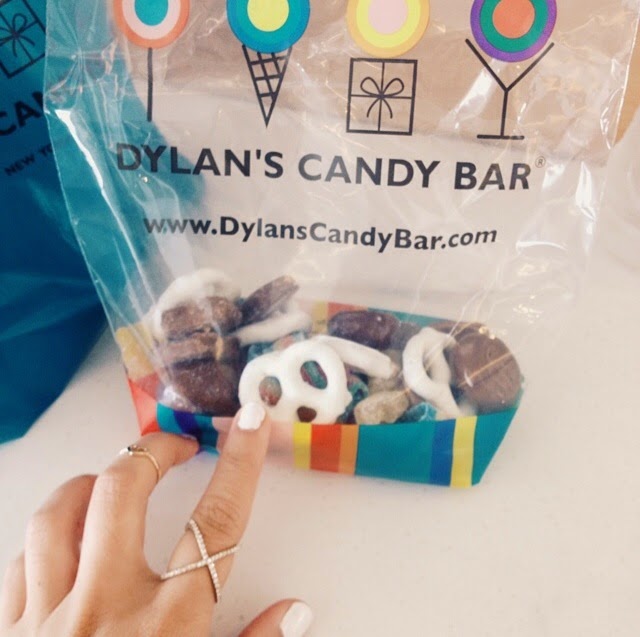 ...while traveling back to California. 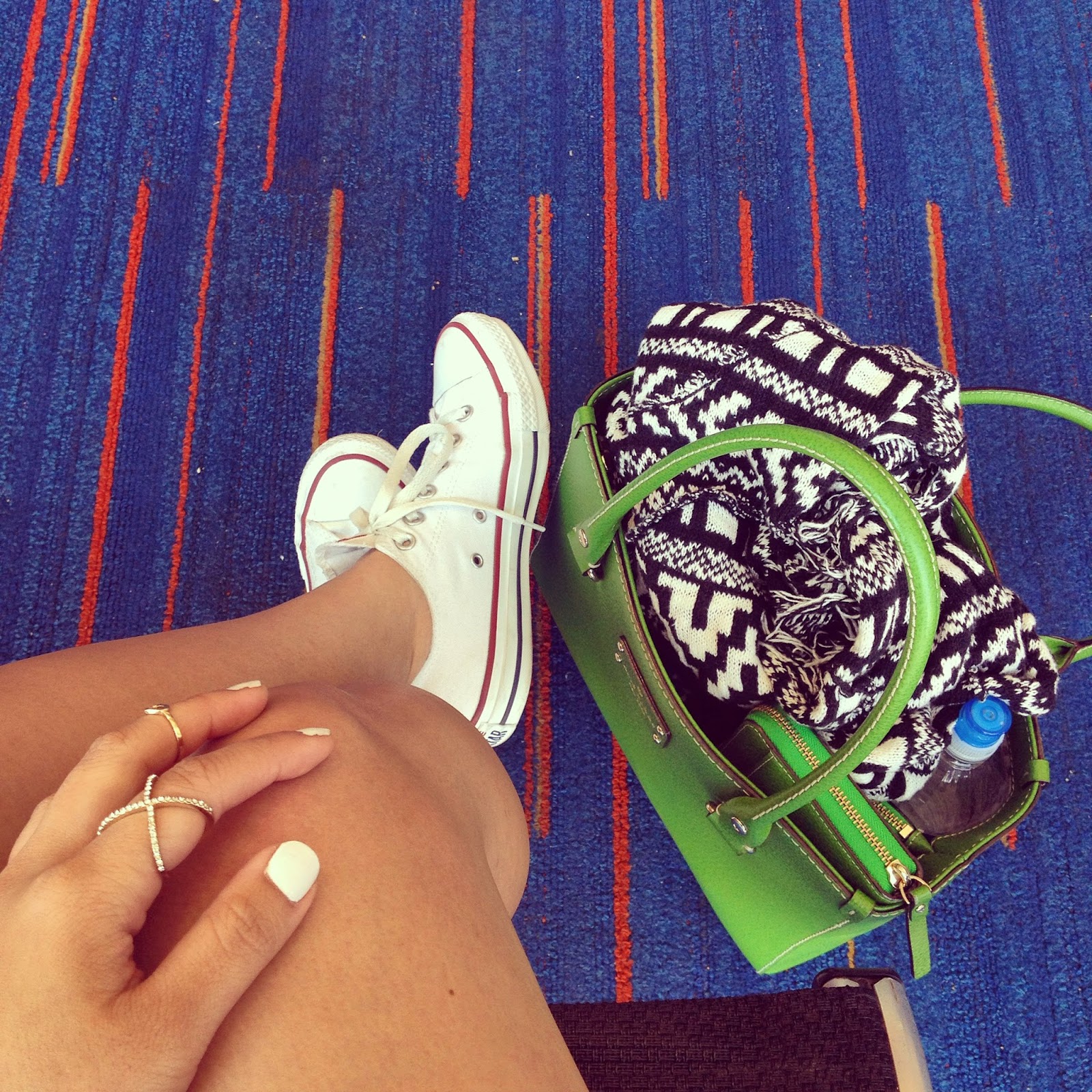 I've been craving salad. Maybe because it's been 100-degree weather and I constantly want to climb into the nearest refrigerator. Or, perhaps I just want to save my fatty fatty food binge for my NYC trip next week. Regardless, there's nothing better in summer than a meal that won't weigh you down.

I was inspired by The Girl Who Ate Everything's Portillo Chopped Salad and decided to give it a Greek spin. 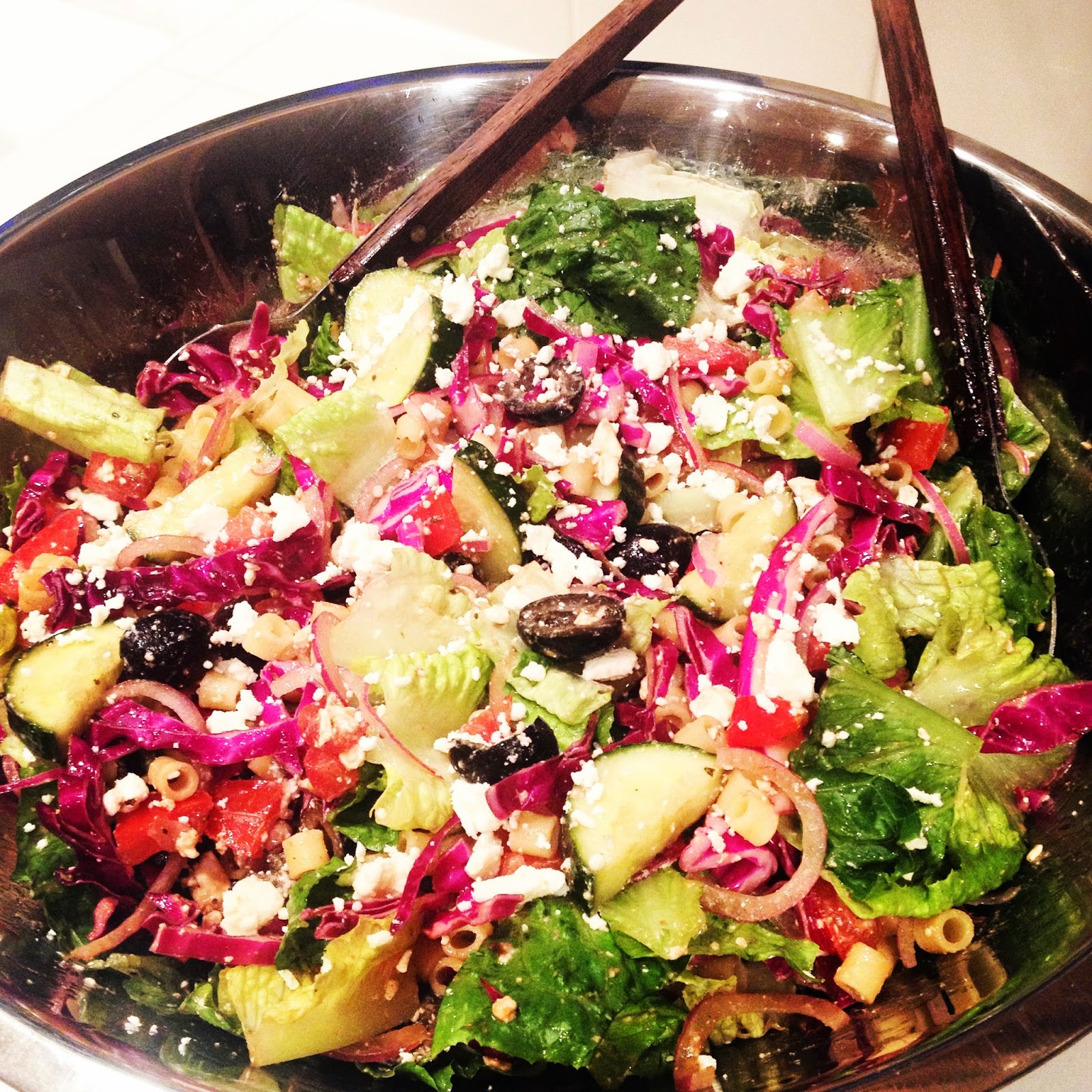 DIRECTIONS
1. In a large bowl, toss all ingredients together except for dressing and feta.
2. When ready to serve, add enough dressing to taste and toss together well until everything is incorporated. Then, add feta last and give it another light toss.

Sweet Balsamic Dressing
Recipe from The Girl Who Ate Everything

DIRECTIONS
You can follow the original directions here. But I was lazy and omitted the blender.
1. Whisk together balsam vinegar, garlic, sugar, dried oregano, salt and pepper.
2. Then whisk in olive oil slowly until everything is combined.
3. Refrigerate for at least an hour before using. Store in an airtight container for up to 2 weeks.
Posted by Bri at 10:16 PM 1 comment: