egg-in-a-hole with sausage and broccoli hash

Lately, I've been obsessed with featuring a runny yolk on my breakfast plate. This morning, I made egg-in-a-hole. If you don't know about egg-in-a-hole, then you have clearly been living on another planet. But let me break it down for you, anyway. It's a slice of bread with a hole cut out of the center and replaced with a fried egg. The bread gets toasted and the egg gets fried simultaneously. Amazing and easy. I wonder how people don't know about this.

I'm never quite satisfied with just an egg and toast, because I know I'll probably end up skipping lunch. So, I like to make my egg-in-a-hole extra hearty with some kind of meat and veggie hash. I absolutely love cutting into the yolk and having the bright yellow yumminess just gush all over the hash. So freakin good. 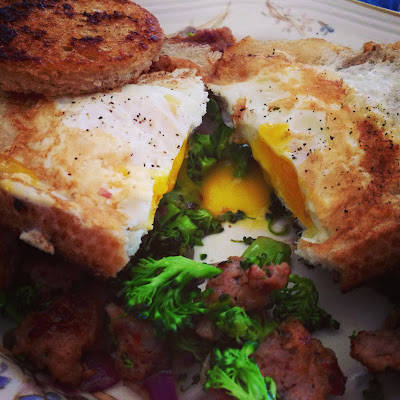 INGREDIENTS
1-2 Tbsp butter (use 1 Tbsp for a smaller slice of bread/smaller skillet and 2 Tbsp for a larger slice of bread/larger skillet)
1 slice of bread (I used a big slice of sourdough)
1 egg
1 uncooked hot sausage link, uncased (use whatever kind you like. I use one of the Johnsonville hot Italian sausages)
1/4 cup chopped broccoli, uncooked
2 Tbsp diced onion
salt and pepper

DIRECTIONS
1. Cut a hole into slice of bread. I used a biscuit cutter but you can also use a glass, cookie cutter, etc etc.
2. Heat a small skillet on medium high heat. Drizzle about 1 tsp into the skillet and saute onion and broccoli, stirring occasionally until tender but not overcooked (unless you like your veggies like that). Then transfer veggies to a bowl.
3. In the same small skillet, on medium high heat, crumble the hot sausage (uncased!). Do not touch the sausage pieces once they hit the pan. Allow them to brown up on that side, which will take a couple minutes. Then flip the over and allow the other side to brown, about another minute. Once the sausage is cooked, add veggies back into the skillet and stir it all together. Turn off the heat, the hash is done.
4. I tend to multitask, so I begin the egg-in-a-hole while the sausage is cooking. But if you are more comfortable, make the hash first. If you ever make fried eggs, you know that letting a fried egg sit around too long is no bueno. In another skillet (that will fit your slice of bread and it's complementary removed center piece) on medium high heat, add the butter.
5. When the butter starts to bubble a bit (but don't let it burn!), place your bread and center piece both into the skillet.
6. Carefully, crack the egg directly into the hole in your bread-- you don't want your yolk to break!
7. Allow the bread to get toasted and the egg to cook. I usually check the center piece of toast on the side. When it's all nice and toasty a golden brown, I flip everything over. I have a habit of flipping my fried egg, which disguises the yolk. It's not as visually pretty when serving but breaking the yolk open and see all that yellow is so much more fun.
8. At this time, you can add a little more butter to your pan if you want to make you toast more gold on the other side. Cook for about 1 more minute. Then it's ready to eat. Don't let your egg-in-a-hole overcook and sit in the pan or else you will lose your runny yolk.
9. Add sausage and broccoli hash to your plate and top with your egg-in-a-hole. Sprinkle a pinch of salt and pepper on top.
10. Devour the whole damn thing. 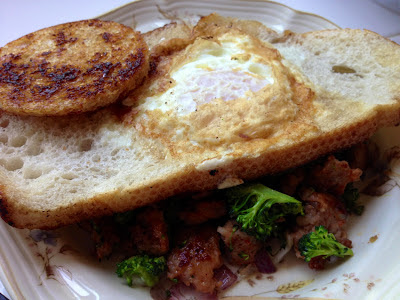