Apples are definitely the best fruit ever.. especially in any baked form.

Whenever I have a craving to bake, I usually make a rustic apple pie and call it a day. It's relatively quick, easy, and it's pretty darn good. However that buttery, flaky crust requires a little bit of nonfat milk (shhh), and milk is not a staple in my Paleo fridge. And thus enter Plan B: apple turnovers.

I may have slipped some phyllo dough into my cart during my Trader Joe's trip yesterday with some fire-roasted red bell peppers and sausage. Clearly, my intention was to make something savory. Shocker.. I went with sweet instead.

Because of the layers of phyllo and butter created by the folding technique, these turnovers are incredibly flaky. Right when you bite into it, they are crisp yet also resemble a sense of lightness. Then, the crunch from the course sparkling sugar. YUM. When you hit the apple, orange zest, and cinnamon filling, something magical happens. If warmth was a flavor, I imagine this is how it would taste-- just the right amount of spice and sweetness. And let's face it, two fruits are always better than one. I don't even know what to say except.. SO GOOD.

DIRECTIONS
1. In a medium saucepan on medium low to medium heat, add apples, orange zest, light brown sugar, white granulated sugar, vanilla, salt, cornstarch, and cinnamon. Cook until mixture thickens, stirring occasionally.
2. Remove saucepan from the heat and set off to the side to cool down.
3. Take phyllo dough out of the package, unroll the stack of sheets, then cover with damp dishtowel. The phyllo dough will dry out quickly, so keep covered with the damp dishtowel when not using.
4. Peel one single sheet of phyllo and place onto a flat surface. Brush the sheet with melted butter.
5. Fold the sheet in half lengthwise. Brush with butter. Fold over once more lengthwise (so you have a long strip of phyllo) and brush again with butter.
6. Place about 1 to 1 1/2 Tbsp of apple filling onto one end of the phyllo.
7. Roll into a triangle shape (like a flag).
8. Brush the outside with more butter and top with some sparkling sugar.
9. Put the turnovers onto a parchment-lined baking sheet. Bake in a preheated 375 degree F oven until golden brown, about 15-20 minutes.
10. Remove baking sheet from the oven and allow turnovers to cool. Then, eat! 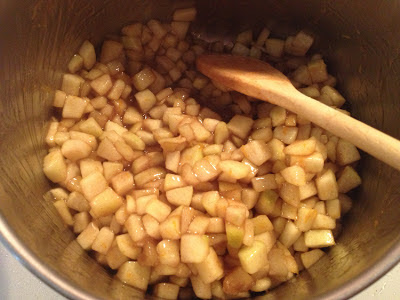 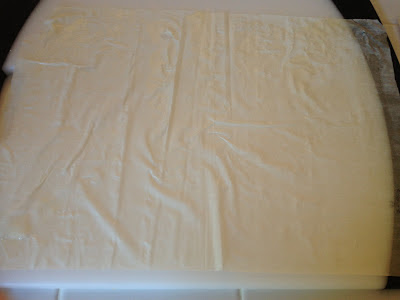 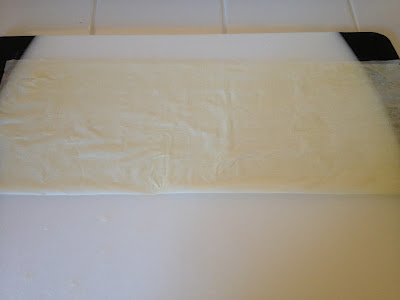 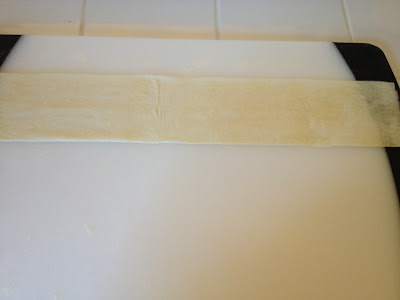 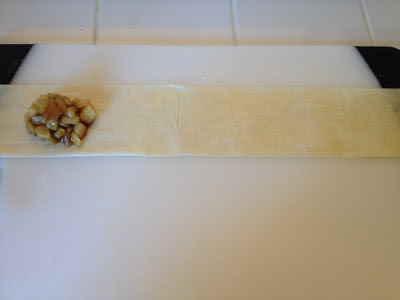 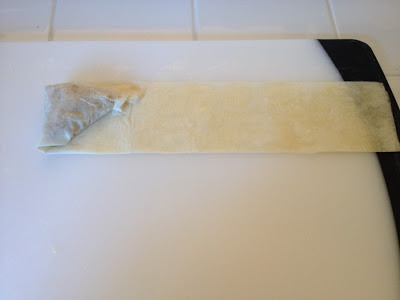 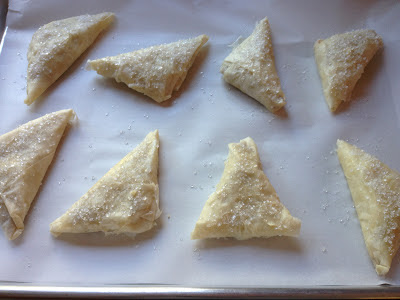 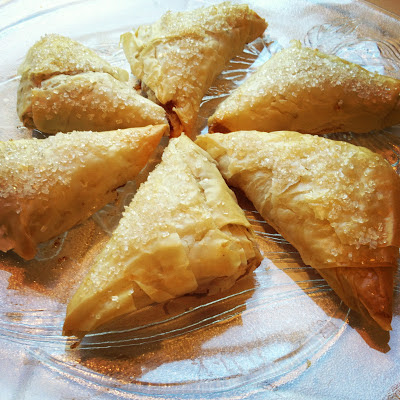